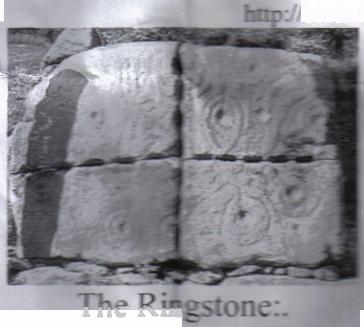 Part of thi| stone (the bottom left in the picture was revealed  when, in November 2007, we widened an existing 2m gateway to 3-Sm. That stone (about 80cm long) was originally on its back with the rings facing upwards and protected with another slab of a stone above it and one below. We replaced the stone in the wider gateway so that the marks were visible. The edge of another ring-set was visible to the left of the circle, where the rock had been split with wedges. The line of the ditch is present on the 1840 ordnance survey – so presumably the gateway and the splitting of the Neolithic slab is about 200 years old

We’re  guessing the original artwork was carried out 4000 years ago. In December 2007, with the help of  curious visitors we discovered two more large stones that appeared to be part of the same original boulder. We reckoned that a five ton granite boulder had been incised with a  design by a Neolithic artist.    http://en.wikipedia.org/wiki/Cup_and_ring_mark

Around 1800+/- 20 years, the mountain was settled, the fields cleared and the boulder cleaved into manageable squared off blocks that could be piled up to make a stable vertical end to each side of the gateway. The wedge-marks of the cleaving were clearly visible on the edges of the stones. This was exciting because two miles to the SW is a wonderful incised stone on the side of a hill at Rathgeran

The 19thC stone cleavers were indifferent to their cultural heritage. They just recognized the stone as being a suitable size and having 2 or 3 all ready present. The  “natural” right-angles suggested that the stone had two cleaving planes at right angles . The cup and rings may have been obscured by mud and /or moss OR may have convinced the cleavers that the grain of the stone  was uniform and fine and so would split as they wanted. I also suspect that the respect for the little people, for heritage, etc was something that filtered down from the likes of Lady Gregory and WB Yeats at the end of the 19thC. So to make the folks 2 generations earlier wear that hood is an anachronism.

In August 2010. we  decided to lift out the incised stones to get a proper look at them. We started lifting stones and found that four of them could be reassembled into a single piece with a natural outside bonier, so we were confident that all the relevant bits of the incised face had been recovered. We laid these bits out on the \    grass like jigsaw. The fourth piece had been put into the gate upside down. The three, apparently undecorated. top bits of the original gateway could also be reassembled and probably represent the rounded “back’ of the original boulder split off to make a squared back to the decorated face. After discussion we decided to reassemble the Ringstone a) vertically b) to form the end of the wider wall. In other words, so that both its Neolithic and 19thC functions were fulfilled. I’d like to say that you can’t see the join, but this is as clearly visible as the dashed line in the middle of a road. These are the marks where wedges were driven into the stone to split it.

You’re all welcome to come visit, please shut any gates you find shut and leave open those you find open. Don’t allow dogs to harry any sheep